Rates Up 4% in Third Quarter

Composite Rate for Personal Lines Insurance Rises to Plus 4.5% 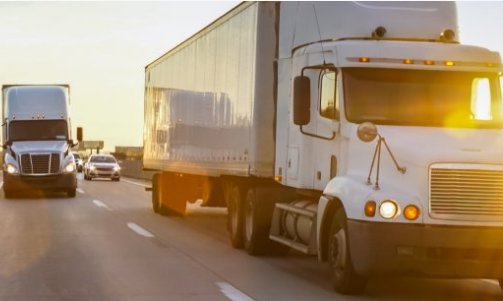 US property and casualty insurers continue to assess rate increases in almost every industry and line of coverage. The composite rate increase in the third quarter 2019 was 4 percent up from 3 percent in the second quarter 2019.

By line of coverage, surety was the only quarter on quarter rate moderation from 1.5 percent to 1 percent. Underwriters assessed rate increases on 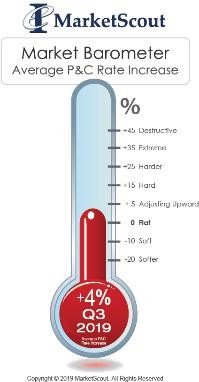 all lines of coverage with the exception of Workers Compensation where rates continued to hold steady at a reduction of minus 1.5 percent. Auto underwriters increased prices the most with third quarter rate increases of 6.5 percent.

By industry class, habitational and transportation businesses were assessed the highest average rate increases at plus 6 percent and plus 7.5 percent.

Richard Kerr, CEO of MarketScout commented, “Thus far, we have had a relatively benign third quarter for property insurers. This helped slow the rapid pace of increases; however, property rates continue to trend upward. Liability and other lines also continue the upward trend. Workers’ compensation rates are still down, but we do see signs indicating workers’ compensation rates may move up in the fourth quarter of 2019.”

A summary of the third quarter 2019 rates by coverage, industry class and account size is set forth below. 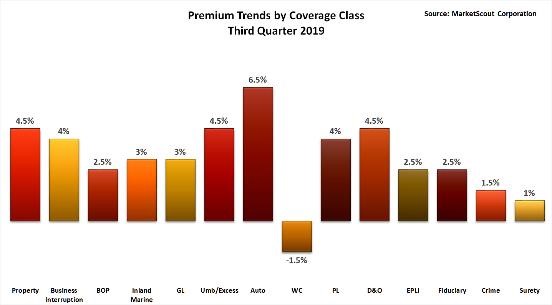 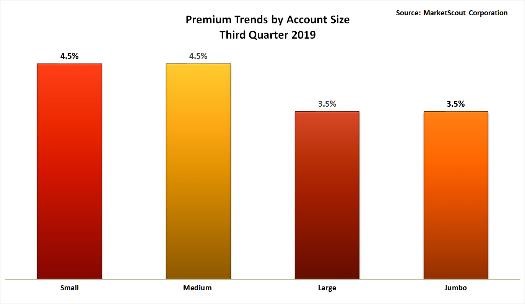 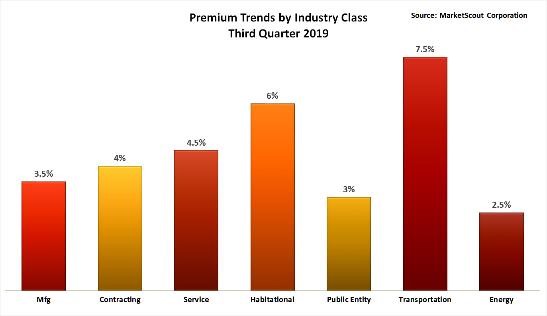 MarketScout, an insurance distribution and underwriting company headquartered in Dallas, compiles the Commercial and Personal Lines Market Barometers. The firm is a Lloyd’s Coverholder and MGA for U.S. insurers. MarketScout owns and operates the MarketScout Exchange as well as over 40 other online and traditional underwriting and distribution venues. MarketScout is founder of the Council for Insuring Private Clients (CIPC) and administers the Certified Personal Risk Manager (CPRM) designation in partnership with The National Alliance for Insurance Education and Research. The firm founded the Entrepreneurial Insurance Alliance (EIA) in 2007 and presents the Entrepreneurial Insurance Symposium (EIS) every September. In 2017, MarketScout founded MarketScout InsurTech (MIT) venture fund. In January 2018, MarketScout launched its Incubator to accelerate start-up MGAs and assume operational functions for existing MGAs and insurers. MarketScout has offices in Arizona, Arkansas, California, Florida, Georgia, Illinois, Nebraska, Pennsylvania, South Carolina, Tennessee, Texas, and Washington, DC. For more information, please visit us at MarketScout.com. California license #0D60423